Our beloved 1966 Ford Galaxie 7-litre has moved on to greener pastures as the saying goes. The beauty is, the new owners are going to give the ‘ol Gal the complete restoration it deserves. Watch for it in a couple years. 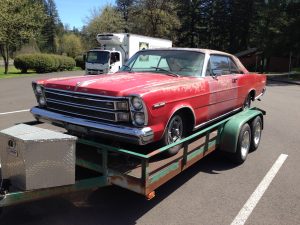 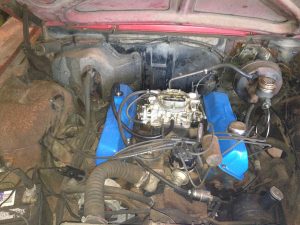 Work is progressing slowly on the 1964 Mercury Montclair Marauder. Basically, it just needs a new fuel pump installed to be a running vehicle. The brake repairs have been completed so it is just a matter of getting the car moving under it’s own power. We have the new fuel pump on hand already and have already installed a newer Autolite 2100 two barrel since the original was pretty gummed up. The original carburetor is rebuildable but it was just easier to swap on the newer one since we had it sitting around. We’ve been spending most of our time on our recently acquired 1966 Galaxie 7-litre so we’ve kind of neglected the poor old Merc a bit lately. The other snag to hitting the track has been finding the rear trim piece on the trunk which houses the trunk lock assembly...

A new addition found it’s way into the FullSizeFord garage this winter in the form of a 1966 Ford Galaxie 7-litre. The 7-litre was a special model introduced by Ford in 1966 to showcase Ford’s all new 428 cubic inch powerplant. Ordering the 7-litre model in 1966 got the owner the 428 engine (a few were outfitted with 427ci engines), disc brakes, XL interior with bucket seats and console, wood grain steering wheel, and special badging. 7-litres were available as a 2-door hardtop fastback or convertible. Choice of transmissions included the all new C6 3-speed automatic or Ford’s venerable Toploader 4-speed manual. 1966 was the only year that the 7-litre was available as it’s own model, being reduced to an option package in 1967 and fading into obscurity beyond that...

This is our daily driven 1961 Ford Galaxie Club Victoria (although it really isn’t driven daily) test mule. This is a factory 352ci three on the tree car. Years ago it was converted to a Toploader 4-speed pirated from a ’67 390GT Mustang. This car is just a cruiser and still wears what’s left of it’s original paint. I’m torn whether to paint it or not. A lot of folks say it’s only original once and you can’t re-create that patina but on the other hand my wife say’s it’s ugly and needs paint! We may break down and paint it someday but it’s not a priority.

This car was originally equipped with air conditioning and still has all the proper pieces in place although the unit hasn’t been charged in years. A R134 retrofit may be in order...