Summer season draws to a close….

It seems like as soon as it was upon us, it was gone (for those of us with children, first day back to school seems to unofficially mark the end of summer).  We look back on the triumphs and tribulations of Summer 2014 in the FullSizeFord camp. The 1/4-mile Marauder again failed to leave the shop (we were so close this time!) due to other projects taking precedence. A match race set up with a friend’s 2009 Subaru Legacy AWD never materialized as we fought to prepare it by the September 19th deadline which signaled the last Friday Night Drags of the season. We most likely could have made it there with the car but passing tech would have been a different story. Guess we’ll have to wait until next year on that one. Maybe by that time I’ll have figured out how to work the Go-Pro. The 1961 Ford Galaxie Starliner sat relatively untouched all summer as did our 1964 Ford Galaxie 500 Fastback Nascar clone. The 1963 Ford Galaxie 500 Boxtop still languishes in Dad’s yard in Oregon (almost lost it to the weeds!). Thanks to some wonderful lingering warm temperatures this fall, the 1961 Ford Galaxie Club Victoria was out today for what is most likely the last time out of the garage until spring. We did make it to a couple of events this year with the patina’d ‘Vicky which received new pipes and Flowmasters this spring and she served us well, never once requiring us to walk or call for help. Though she begins her annual hibernation, as do most vintage cars existing in the harsher climate areas of the Pacific Northwest, the Galaxie will not be left alone during the seemingly long winter months. While she is tucked safely indoors, protected from that wonderful white stuff falling from the sky, we hope to replace her venerable 1964 vintage 390 cubic inch V8 with a 428 cubic inch FE powerplant that has been plucked from between the fenders of a 1966 Ford Thunderbird. The Club Vic has developed a bit of an oil leak at the rear of the engine where the intake meets the cylinder head (Ah the aroma of oil dripping on hot exhaust!) and it’s time for a freshening up of the Toploader anyway. A mild winter would help tremendously as we prepare for another season of FullSizeFording! 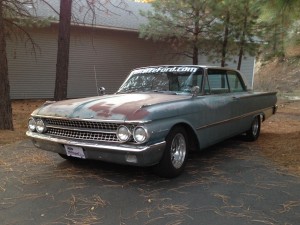 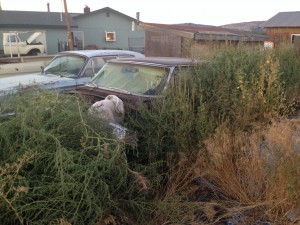