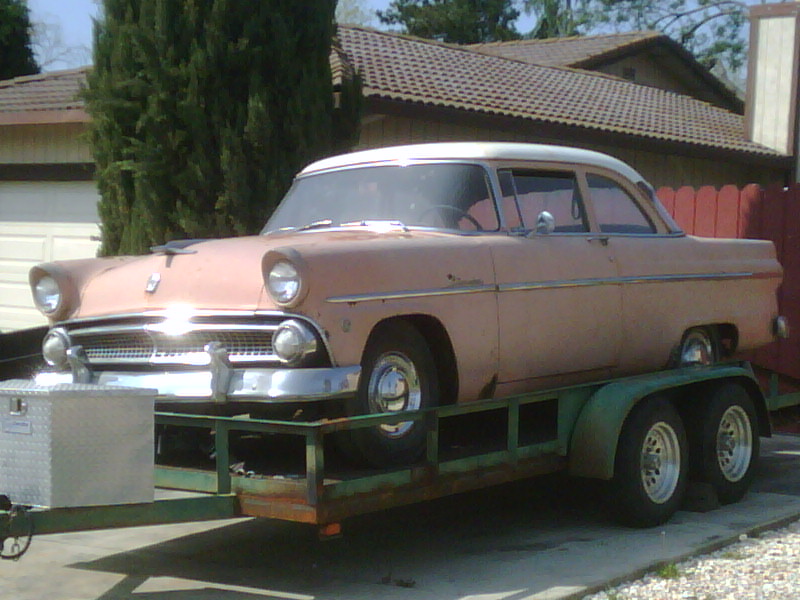 The ’55 is finally home in the shop after spending last winter under a tarp in Klamath Falls, Oregon. I’ve included some pictures to show what it’s initial condition is upon embarking on this project. This car was purchased in San Jose, California where the original owner had parked it in 1979 upon buying a new car. I obtained the car from a neighbor who acquired the car shortly before the owners passing. The story goes that a tree had to be cut down in order to remove the car from the original owner’s back yard. The car is a time capsule, with everything left in it’s original state including the oil bath air cleaner and bias ply tires.

Unfortunately, the car was left under a tarp for many years, destroying the floorpans from moisture trapped inside the car. This is really the only bad area of the car as far as rust goes other than the lower rear portions of the front fenders. The car still retains it’s original drivetrain including the 223 cubic-inch “Mileage Maker” six cylinder and Fordomatic automatic transmission. The car still retains the 6 volt electric system which of course will be upgraded to a more current 12 volt system.

I do plan to try to get the car running in it’s current state just for fun. The engine still turns over freely. I will have to go through the entire fuel delivery system starting with the fuel tank which has a hole in the bottom. The lines and fuel pump will most likely have to be replaced as well. As far as the interior goes, moisture and critters have taken their toll. The seats will have to be completely refurbished, the headliner is present but in sad condition.

The eventual plan for this car is to install a 32 valve Intech 5.4 liter V8 and automatic transmission from a salvaged Lincoln Navigator 2 wheel drive. Completely updating the front suspension with disc brakes, tubular A-arms, and rack & pinion steering are also in the future. Maybe even air ride as well. A custom Ford 9-inch with rear disc brakes will hopefully make it’s way under this Ford also. We have a ways to go with the Mod motor install being by far the largest obstacle. The new 5.0 liter Coyote crate engine from Ford Racing is another option if a reasonable donor Navigator eludes us. Our goal is to have this car look every bit of 1955 on the outside but be completely today underneath it’s skin. If we install Air Conditioning in it maybe, just maybe my wife might go for a ride in it.

Update: This car has been sold. No reason to be sad however, as they say, “Every end is a new beginning.” Already watching for another ’55 or ’56. Still want to complete a “If Bob Falfa drove a Ford in American Graffiti” project. 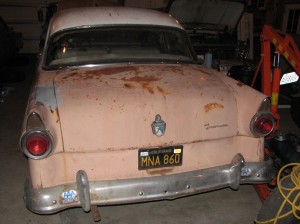